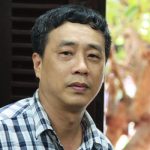 Nguyễn Bình Phương (b. 1965) was born in Thai Nguyen, north of Hanoi. He first worked as a propaganda painter during his four-year military service. He then began his literary life as a poet and quickly became the literary editor of the Army Literature and Art Review, where he now serves as editor-in-chief. Phuong’s writing career spans nearly thee decades. He has written a series of novels to much critical acclaim, among which are Những đứa trẻ chết già  (Those kids die old) and Thoạt kỳ thủy (translated into French as A l’origine). He is described as the innovator of the art of fiction in Vietnam.