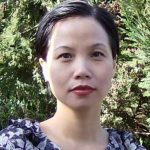 Thuận (b. 1968) settled down in Paris after her studies in Moscow. She sometimes leaves France for Hanoi, New York or Berlin. In 2008 she was awarded the Prize of the Writers’ Union, the most prestigious literary award for Vietnamese literature. Some of her works are currently banned in Vietnam, including her sixth novel An elevator in Saigon. Four of her novels have so far been translated into French.