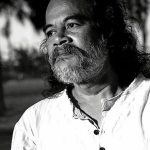 Saneh Sangsuk (b. 1957) is the award-winning author of White Shadow (2001) and the short story Venom (2001). His collection Venom and Other Stories won him the 2014 S.E.A. Write Award. As for his book White Shadow, it is considered one of the best 20 novels in Thailand. Some of his works have been translated into various languages (incl. German, French and Spanish) and in 2008, he received the Ordre des Arts et des Lettres (Order of Arts and Letters) Medal from the French Ministry of Culture for his remarkable contributions to literature. Currently, Saneh lives in Phetchaburi, Thailand, and uses the pen name Dan-arun Saengthong in his published work.