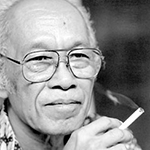 Pramoedya Ananta Toer (1925-2006), affectionately known as Pram, was an Indonesian author of novels, short stories, essays, polemics, and histories of his homeland and its people. A well-regarded writer in the West, Pramoedya’s outspoken and often politically charged writings faced censorship in his native land during the prereformation era. For opposing the policies of both founding president Sukarno, as well as those of its successor, the New Order regime of Suharto, he faced extrajudicial punishment. During the many years in which he suffered imprisonment and house arrest, he became a cause célèbre for advocates of freedom of expression and human rights.