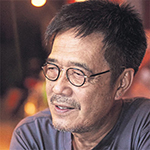 Chart Korbjitti (b. 1954) first came to prominence with the publication of his novel The Judgment in 1981. Named as Book of the Year by Thailand’s Literature Council, the book won him the S.E.A Write Award. He received a second S.E.A. Write Award in 1994 for Time. He was named a National Artist in Literature in 2004, and was among the honorees of the inaugural Silpathorn Award, given to Thai contemporary artists. He has established himself as a full-time writer, stating, « I choose to be a writer. I give it my whole life. I have traded my whole life for it. » He has founded the publishing house Samnakphim Hon (Howling Books), which publishes all of his work.